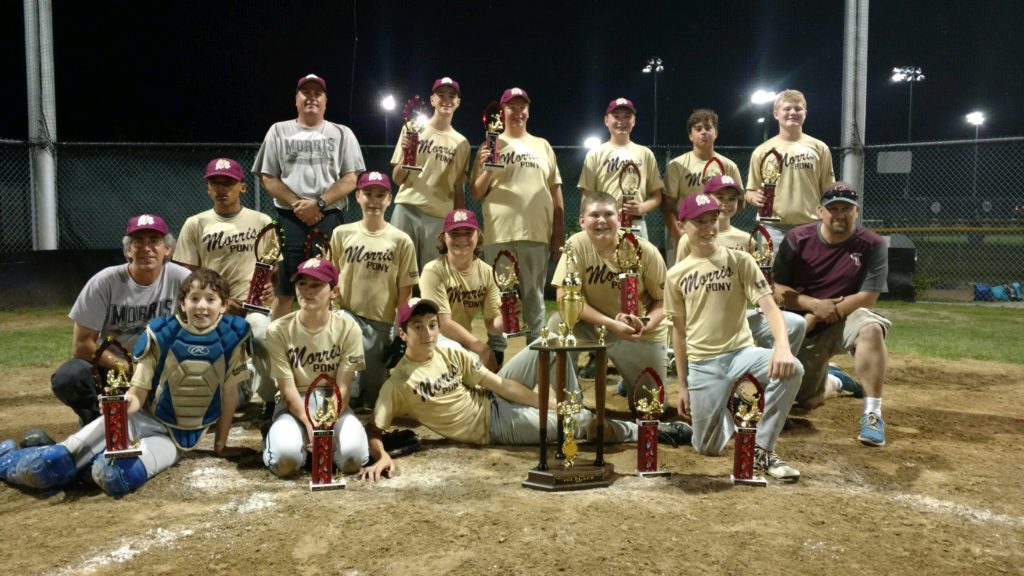 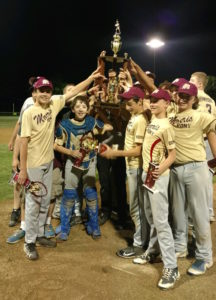 Morris’ Hemmersbach Construction Pony Team goes all the way in the playoffs to take the Crossroads of Mid-America Pony League Championship. Finishing the regular season as the 7th seed, Morris would have to win three bracket games to get to the championship finals with the fourth game a chance at the championship.

The playoffs started on Monday June 18th for Morris which they played against a Troy Pony team that night. Threatening weather would only allow the teams to play through the 2nd inning before lightning in the area forced the umpires to call for a stoppage of play. They tried to wait it out and hope for a break in the weather, but the lightning continued, and the game was postponed for safety reasons until Tuesday. The game continued where it left off starting the third inning with Morris up 9-7. This was a slug fest with everyone in the batting order getting into the run scoring action. With not much defense from either team from the first inning until the fourth inning where finally pitcher Bryce Quevedo slow the opponents down. A total of 34 runs were scored in the game with Morris on top 21-13 after six innings of play when the game was finally coming to an end due to time limit after the weather delayed game.

Because of the weather delays, Morris would have to play a third consecutive day for their second-round game against the No.2 seed in the league, a team from Belmont, Joliet. Chaser Ellison started the game at pitcher and threw five strong innings before he left the game with a 4-3 lead. Morris’ Zach Berman got the scoring started by getting on with a hit in the top of the 1st and the 4th and scoring on hits both times by Matthew Stark. Morris added to its lead by scoring four more runs in the top of the sixth with the help of lead off hit by Jackson Simon and then a hit by Chaser Ellison who later scored on a two-run double by Patrick Stroup. Stroup then scored on a hit by Justin Hemmersbach to give Morris an 8-3 lead going into the bottom of the sixth. Matthew Stark pitched the sixth inning where Belmont scored a single run to make it 8-4. A quick top of the seventh for Morris lead to the bottom of the seventh with three outs left to move into the semi-finals. Tayden Thacker was given the ball on the mound to start the bottom of the seventh to close it out. An error let the first batter on base, but Thacker shut the door by striking out the next two batters with the final batter hitting one back to the mound where Thacker made an easy throw to the 1st basemen to end the game and send Morris to the semi-final round.

Game three was scheduled for Thursday June 21st which would have made Morris play on a fourth consecutive day, but mother nature intervened, and rain cancelled Thursday’s game and again on Friday. The cancelled games helped Morris rest up for whenever the playoffs would resume. The league was scrambling with multi options if the fields would not be ready even by Saturday with all the rain that had fallen the past two days. With the help of some dry weather and the efforts of the Whiteford league grounds crew, the fields were pronounced playable although there were plenty of wet and mushy spots in deep left and right center field. The semi-final games and the finals would all take place on Saturday June 23.

Morris’ semi-final game was played against St. Joe’s Joliet Pony team starting at 12:30pm with the winner playing in the finals at 7:45pm and the losing team would play at 5:30pm for 3rd place. Bryce Quevedo was the starting pitcher with both team’s pitchers having two quick innings before the scoring started. Morris struck first with three runs in the top of the third with hits by Aiden Rodeghero, a run scoring triple by Bruce Quevedo, followed by a run scoring single by Tayden Thacker who scored on a hit by Trevor Nystedt. Morris up 3-0 going into the bottom of the third where St. Joe’s picked up two runs to cut into Morris’ lead to 3-2 after three innings. Morris would get the two runs back in the top of the 4th on hits by Matthew Stark, Justin Hemmersbach who scored on fielder’s choice hits by Justin Newman and Aiden Rodeghero to give Morris a 5-2 lead. St. Joe’s being the sixth seed was not going to let Morris keep adding runs without fighting back in which they scored 2 runs in the bottom of the fourth to make the game a little tighter at 5-4. No runs in the fifth for either team. Morris adds a run in the top of the sixth to make it 6-4 and not to be outdone, St. Joe’s comes right back and scores a single run off of new Morris pitcher Chris Harris who finishes and ends the inning strong with Morris up 6-5. Morris scores their seventh run in the top of the seventh with a double by Justin Hemmersbach and a run scoring single by Justin Newman to give Morris a two-run lead going into the bottom of the seventh and 3 outs left to make it the championship game. Chris Harris took the mound in the seventh and takes care of business 1-2-3 with a ball hit back to him and an easy throw to first, a line out caught by first basemen Bryce Quevedo and then a final strikeout by Harris for the save to send Morris into the Pony League finals.

The Championship game was scheduled for a 7:45pm start and Morris had to wait for the other bracket game result to find out who their opponent would be between Channahon and Cresthill. Channahon the league’s No. 1 seed won their semi-final game to meet Morris in the Championship game. Being the lower seed, Morris was the away team and batted first. In each of the first 3 innings they put runners on base but could not get any runs on the board while Channahon scored one run in each of the first three innings to take a 3-0 lead. Chaser Ellison started at pitcher and was later replaced by Tayden Thacker in the third inning. Morris’ Trevor Nystedt and Gabe Valero lead-off the fourth inning with consecutive hits to start Morris’ rally and after a strikeout, Chaser Ellison, Zach Berman put two more hits on the board to score two runs. And before the rally ended, Matthew Stark and Justin Hemmersbach also had back to back hits to score Ellison and Berman to put Morris in the lead 4-3 after the top of the fourth. In the bottom of the fourth Channahon put men in scoring position but Morris’ defense lead by pitcher Tayden Thacker took over and the fourth inning ended with Morris up 4-3. Morris added a run in the top of the fifth with a hit by Bryce Quevedo and scoring on a hit by Nathan McTague to take a 5-3 lead. Channahon in the next two innings put a baserunner on base but could not drive in a run. Morris did not score either in the 6th or 7th inning and leading 5-3 going into the bottom of the 7th had three outs away from the championship. Channahon’s lead-off hitter made out on a ground ball to 2nd basemen Chaser Ellison. The next two batters reached base to runners on 1st and 2nd. Channahon’s fourth batter of the inning hit a ground ball to Thacker who threw to 3rd base to get the lead runner for the second out and leaving runners on 1st and 2nd base. Thacker got two quick strikes on Channahon’s next batter and on the fourth pitch popped up toward 2nd base where Chaser Ellison called for it, caught it for the third and final out and all the players from the field and bench ran together near the first base foul line and the pitcher’s mound to celebrate the championship like it was the World Series which for the 13, 14 and the one 12 year old, it was the world series. Coaches Brian Stroup, Paul Harris and Lew Berman each grab each other for a celebratory shake and hug as the season ended in a fashion none of the three would have guessed or bet on.

The trophy ceremony followed the celebration with Channahon being acknowledged as the regular season’s top finisher and then receiving their second-place trophies. They should be congratulated on their first-place finish and a great championship game. Morris was next up to receiver their Crossroads of Mid-America Pony Championship trophies. Bryce Quevedo and Tayden Thacker were voted by the Morris coaches as Co-MVP’s for their solid pitching effort in multiple games to shut down all of the higher seeded teams Morris had to beat to win the Championship. Now it was the parents turn on the field to take pictures of the kids as a team, groups and individuals holding the team trophy as if it was the Stanley Cup. The Morris kids can now bask in their win for the rest of the summer and the memories of a season ending Championship.