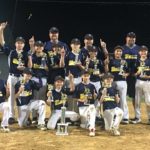 Starting pitcher form Morris Ethan Kubina worked the first 2 innings for the South giving up 1 hit, striking out 4 & walking none. For the North Cevyn Crawford from St. Joe’s got the only hit off Kubina with a double in the top of the first inning. In the bottom of the first Morris’s Riley Ponio put the South on the scoreboard with a home run for 1 to 0 lead off the North’s starting pitcher from Channahon Nick Gomoll.  Gomoll gave up only the home run & a single by Morris’s  Asa Cooper through the first 3 innings with 5 strikeouts. In the bottom of the third the North scored two runs when Crest Hill’s Edgar Rodriquez reached base on a infield error & went to second on a pass ball. Rodiquez moved to third on a infield hit by Channahon’s Jake Mayfield & scored on a infield hit by Channahon’s Donny Sonnenberg. Mayfield then scored on a wild pitch to give the   North a 2 to 1 lead.   In the top of the 4th for the North  Channahon’s Kurt Sonnenburg tripled with one out & was left stranded. In the bottom 4th the North’s starting pitcher Gomll walked the base loaded. Kurt Sonneburg came in & picked the runner off first. After another walk Troy’s  Devin Singer singled scoring two runs & another two walks. The South scored 4 runs for a 5 to 2 lead. Morris Riley Ponio pitched the third & 4th innings for the South giving up 3 hits, striking out 3, no walks & 2 unearned runs. In the top of the 5th for the North Crest Hill’s Sam Novak & St.Joe’s Adam Aguilera lead off with back to back doubles off Troy pitcher Bryson Laken to cut the South’s lead to 5 to 3. In the top of the 6th Channahon’s Nick Gomoll lead off with a single & was thrown out on a attempted steal. Channahon’s Jake Mayfield, Jake Manning, & Donny Sonnerburg followed with 3 single’s to load the bases.  St. Joe’s Richard Facchina then followed with a triple scoring 3 runs to give the North the lead 6 to 5.  In the bottom of the 6th the South regained the lead off Crest Hill’s pitcher Ryan Highland on a walk, hit batter, & singles by Whiteford’s Chris Hogan & Morris’s Alec Lovell . In the top of the 7th the South  brought in pitcher Devin Singer from Troy who retired the side in order with 2 strikeouts for the save.

In the 2nd game Josh Cunniff from Crest Hill doubled  & scored on a attempted pick off play throwing error from 2nd base giving the North a 1 to 0 lead. Morris’s Kubina pitched the first 2 innings giving up one hit, striking out one & giving up on unearned run. The scored remained 1 to 0 until the top of the 4th inning . Whiteford’s Chris Hogan reached first base on a infield error with 2 outs. Morris’s Alec Lovell doubled scoring the South’s first run & Bryson Laken from Troy followed with a single to give the South the lead 2 to 1 lead after 4 innings. In the bottom of the 5th & the South leading 2 to 1, St. Joe’s Cevyn Crawford reached first base on a infield error & went to second on throwing error on a attempted pick off. Crest Hills Sam Novak followed with a single & St. Joe’s Adam Aguliar walked to load the bases. Alex Rocha from St. Joe’s tripled clearing the bases to give the North a 4 to 2 lead after 5 innings. In the top of the 6th Minooka’s Anthony D’Apice was hit by a pitch & Whiteford’s  Chris Hogan singled, but were left on. In the top of the 7th the South mounted a rally with two infield errors & a single from Bryson Laken with one out. Cevyn Crawford the starting pitcher for the North from St. Joe’s  then struck out the last two batters to give the North a split on the evening with a 4 to 2 victory. Crawford struck out 6, walked none, hit one batter, gave up 5 hits in a outstanding complete game effort & 2 unearned runs. For the South Devin Singer pitched 2 innings, & Brody Schock & Trent Sandeno from Morris each pitched one inning. 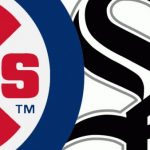