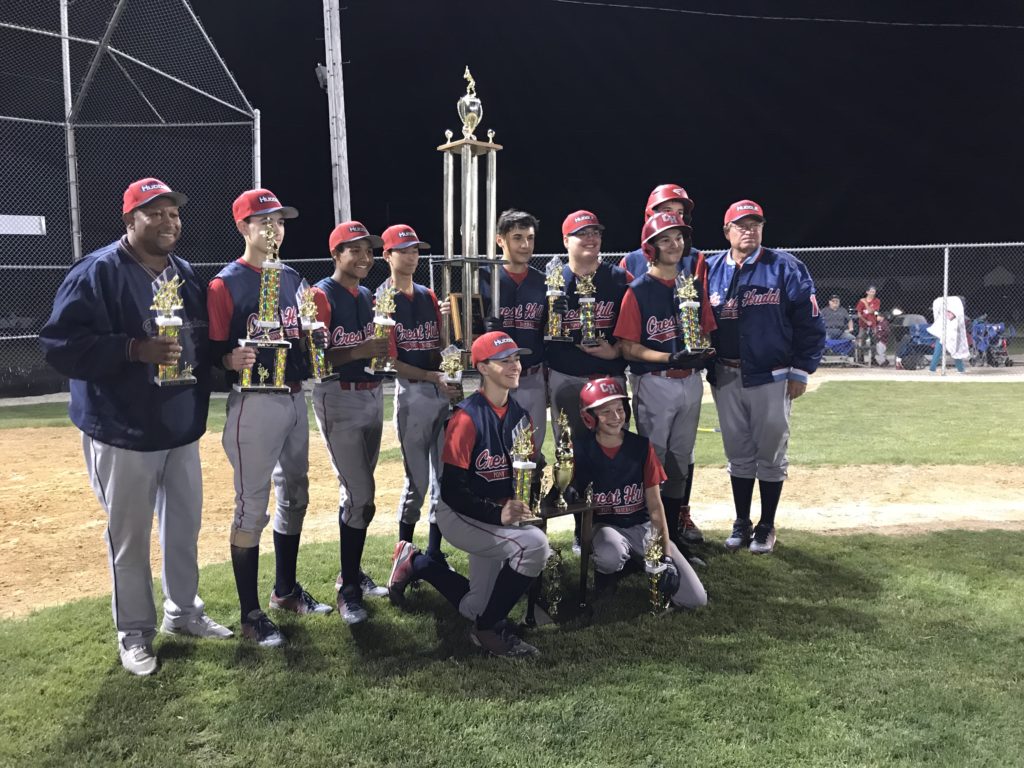 In Friday night’s, wild 2019 Crest Hill DuPage River Conference Pony League Tournament Championship Game, Haunter, stepped to the plate in a 6-6 tie, in the bottom of the seventh inning.

Teammate John O’Brien, who had walked to leadoff the inning, represented the tourney-championship, winning run, on third. After O’Brien walked, catcher Nick Perez (2-for-4, 2B, RBI), ripped a double, with O’Brien stopping at third.

“Initially, I was just in shock after we had won the game,” Haunter added. “Then I it was an absoulutly, awesome feeling.”

“Whiteford is really, really good and I was surprised and happy, that we beat them tonight for the championship,” O’Brien said. “Scoring the winning runs was  just a really, really, awesome feeling. First time ever for me, winning a championship.”

“I want to tip my hat to the Whiteford kids and their coaches,” the legendary Crest Hill manager, Joe Marshall said. “They gave us our only loss of the season and battled us in every other game. Another one-run win tonight. What a nail-biter!”

Each team picked up an unearned run, in the top of the first inning. Whiteford All-DRC, starting pitcher, Casey Tyrell’s, safety-squeeze bunt, plated, leadoffman, All-DRC, Nick Ernst (1-for-2, 2B, 2BB, R, SB). Crest Hill, tied the game at 1-1 on an RBI single from, All DRC shortstop, Luke Nolan (2-for-4, RBI).

Crest Hill, would  tie the game at three, on RBI singles from DRC Tournament MVP, Colin Sanchez (2-for-4, 2B, RBI) and O’Brien, in the bottom of the fifth.

“It was so exciting to win the DRC Championship. We all were jumping up and down and screaming!” Sanchez said. “It was a real honor for me to be named MVP. I had a great season and really enjoyed it.”

With the bases loaded and one out, Perez executed to perfection, a little “Marshall Small Ball” to grab a 5-3 lead. Perez laid down a perfect squeeze bunt ,scoring Nolan and when Tyrell threw wildly to first, Sanchez scored for a 5-3 Crest Hill lead.

“We work on bunting every day,” Marshall added. “What a beautiful, picture-perfect bunt, by Nick to get us two runs. Sadly, bunting has turned into a lost-art, in baseball.”

The never-say-die Bulldogs of Whiteford, answered with two runs in the top of the sixth, to tie the game at 5-5. A Crest Hill errant throw and a Zigmont, steal of home, pulled the Bulldogs even again.

Crest Hill grabbed the lead on a Whiteford miscue, in the bottom of the sixth.

Whiteford had run all over Crest Hill and their catcher Nick Perez. The Bulldogs had swiped nine bases and with two outs, in the top of the seventh, they tried for No. 10.

Catalano, who had tied the game with the double, tried to steal third. Perez came up with his best throw of the night, shooting down Catalano at third, on the tag by O’Brien, to end the inning.

“I was really nervous but I got off a good throw to get Catalano out at third, to end the seventh,” a much-relieved Perez added. “It felt amazing to see Joe’s hit win us, the championship.”

We talked with a number of the key Crest Hill Sports Huddle Champions, after the game.

All-DRC shortstop and the game’s winning-pitcher, Dom Williams. Williams stole five bases in the game, giving him a DRC record 75 stolen bases, for the season.

“Great to win a championship with these guys,” Williams said.

“After last night and then again tonight, I am bushed,”  a tired but very happy Marshall concluded.

In the third place game, Morris’ Kendall Copters (8-16), scored five times in the first inning and rolled to a 7-3 win over Belmont’s Lawson Garage (9-13).

As the second semifinal entered the bottom of the seventh, the Belmont kids led the DRC regular season champs, from Crest Hill, 7-6. Nolan walked to leadoff the inning. Soifer sacrificed and then the tying run came home on a Belmont miscue. Sanchez singled home, the game winner, for the heart-stopping 8-7 win.

Crest Hill’s game-winning pitcher Jeremy Robinson, entered the game in the top of the sixth, with Belmont runner’s on second and third, with two outs. Robinson dispatched the Belmont hitter on three strikes, and retired Belmont, 1-2-3 in the seventh. Sanchez’s walk-off made a winner of Robinson and Crest Hill,  who went on to another thrilling walk-off win, tonight.

By Drake Skleba For the Bugle