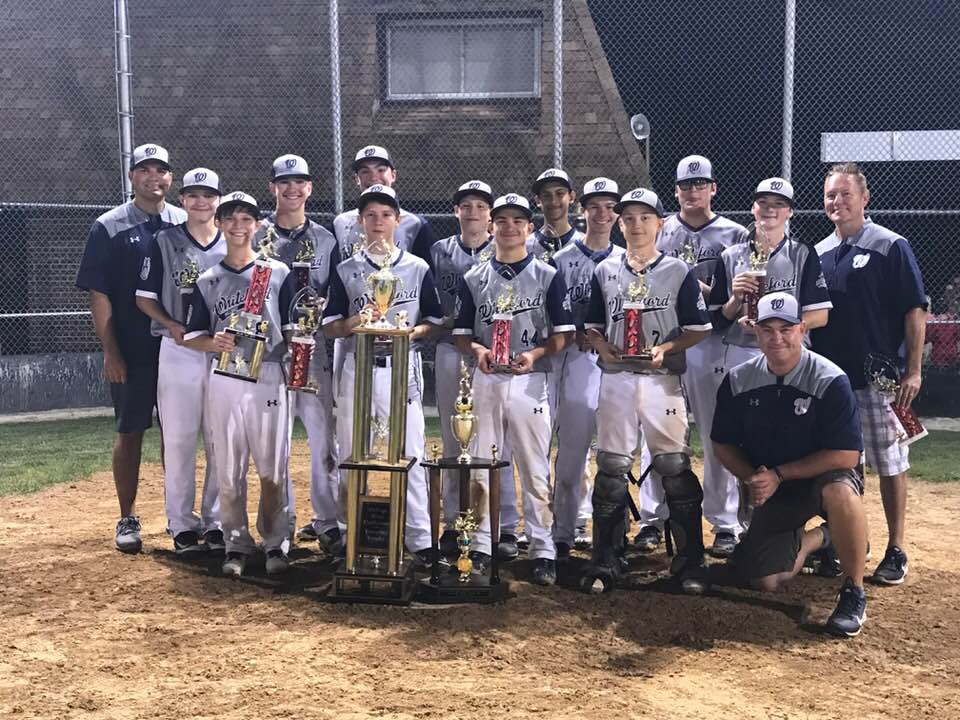 Whiteford, under the tutelage of manager Jim Selinger, and Crest Hill Sports Huddle, under manager Joe Marshall, had met four times in the DRC regular season.

Whiteford routed Crest Hill in the first two meetings, 13-3 and 17-7. Crest Hill rolled past Whiteford, 8-2, and then evened the series with a thrilling 4-3 win in eight innings.

The rubber match between the Crest Hill Pony League powers was for the DRC tournament championship.

In a wild battle, the Bulldogs from Whiteford outlasted Crest Hill, 12-9, before a large and vocal contingent for both teams. After All-DRC Whiteford center fielder Javier Villagomez had given the Bulldogs (26-13, 15-3) leads of 7-6 and 11-7 with two-run singles in the fourth and fifth innings, the play of the game came next.

In the top of the sixth inning, Crest Hill (20-8, 11-7) had scored twice to pull within 11-9. Crest Hill had the bases loaded with one out against Whiteford’s only 13-year-old, pitcher Bradey Hagenbaumer. Crest Hill’s Nate Cronin hit a high fastball in the direction of Whiteford second baseman and starting pitcher Dom Cristy (5-0).

“Before the play, I was hoping that the ball would be hit to me. I knew what I would have to do,” Cristy said.

Cristy fielded the grounder, put the tag on Crest Hill’s Orion Hernandez
(2 for 3, three RBIs), who had reached on an RBI single, and then threw a strike to Whiteford first baseman Sam Lestina to complete the inning-ending double play.

“Dom’s double play was the play of the game,” Selinger said.

Whiteford picked up a run in the bottom of the sixth, and Hagenbaumer mowed down Crest Hill in the seventh, nailing down the save for Whiteford winning pitcher Cam Goodwin.

“Catch the ball, and we are the champions,” Cristy said. “It feels great to be the champs.”

Crest Hill scored four times off Cristy in the top of the first, highlighted by a 280-foot, two-run homer off the bat of All-DRC shortstop Josh Cunniff, who had two hits.

Whiteford, which received 14 bases on balls from Crest Hill pitchers, used four walks to pull within 4-3 in the bottom of the second. Nate Gallagher and Matt Medders each coaxed bases-loaded walks to pull the Bulldogs within one.

Crest Hill opened a 6-3 lead on a Hernandez RBI single and an RBI groundout from Cronin in the top of the fourth inning.

Six walks and a crucial Crest Hill error led to six runs in the bottom of the fourth inning and a 9-6 Whiteford lead. Gallagher, who walked three times, coaxed another bases-loaded walk before Villagomez’s first two-run single put the Bulldogs up, 7-6. Whiteford catcher Luke Selinger (2 for 4, double, RBI) made it 8-6 with a booming double down the left-field line.

“I really hit the ball hard on the single that gave us the 7-6 lead in the fourth inning,” Villagomez said. “The fifth-inning single, I just wanted to put the ball in play. Feels great to be champions.”

Whiteford winning pitcher Goodwin had his fastball working as he struck out five Crest Hill batters in three innings of relief to pick up the win.

“I knew I had to come in to settle us down and throw strikes,” Goodwin said. “My fastball was great tonight.”

“Cam really brought a semblance of order to the game for us,” Selinger said. “He was outstanding.”

“It was scary for me out there, but it feels awesome to be the tournament MVP and champions,” Hagenbaumer said. “I’m looking forward to leading next year’s team for a repeat.”

“I’m so proud of the kids for how hard they played tonight,” Selinger said. “I am proud of the way the Crest Hill kids played as well.”

“We had a great season,” Cunniff said. “It felt great to get my seventh home run. I have been seeing the ball well all summer. It stinks that we didn’t win the championship.”

“Fourteen walks and four balks,” Marshall said. “Wow! That’s not going to win any games for you against a great Whiteford team. We lost tonight, but we will meet Whiteford in their tournament in two weeks. We are already preparing for that meeting now.”

Rain on Thursday and Friday caused the tournament semifinals to be moved to an 11:30 a.m. Saturday start.

Dale A.C. beat Whiteford Dupree Heating & Air Conditioning, 5-2, in the first semifinal. Crest Hill Sports Huddle topped Channahon Coldwell Banker, 5-4, in the second semifinal to avenge two one-run losses in the regular season. The outcome meant Channahon did not have a team in the tournament championship game for the first time in three years.

by Darke Skleba
Original article located at the Herald-News.