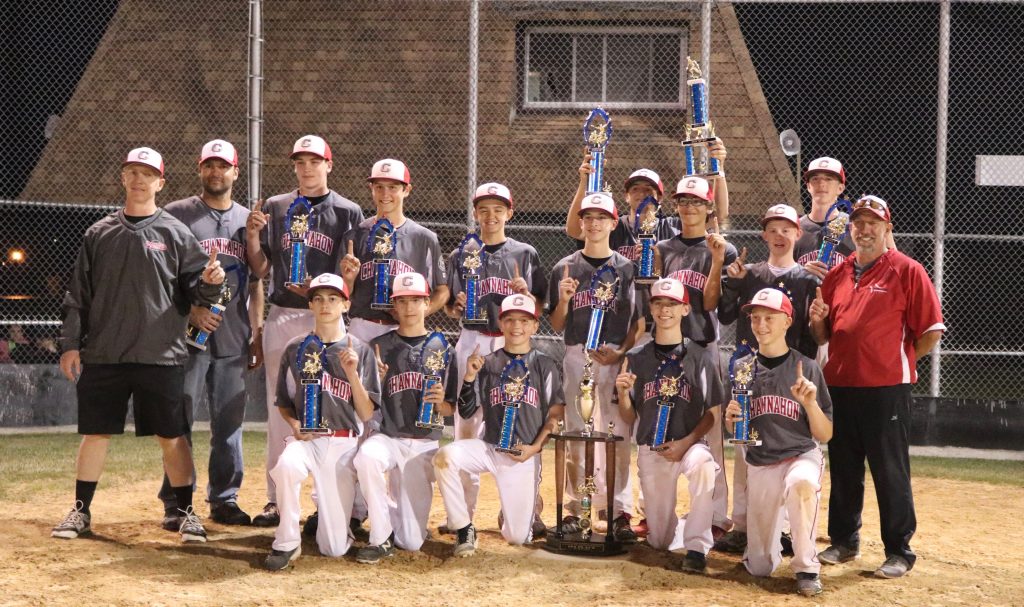 Trailing 2-1 in the top of the seventh inning, Channahon’s Nick Gomoll’s two-out, bases-loaded single brought home Kurt Sonnenberg with the tying run. In the top of the eighth, with one out, Jake Mayfield ripped a double and scored the eventual winning run on an RBI ground out by Jake Manning.

Sonnenberg nailed down the save in the bottom of the eighth for DRC Tournament MVP Dalton Pickett as Channahon rallied for a 3-2 extra-inning win.

Channahon (27-6) fell in the 2016 DRC Tournament championship to Troy Titans Blue. Minutes after the 2016 title loss, head coach Jason Bisbee said, “We return everyone in 2017. We should be pretty good.” Indeed.

After Riley Ponio sent a Pickett fastball over the center field fence for a 1-0 Morris lead, Channahon picked up an unearned run against starter Ethan Kubina, who was the winning pitcher in the three regular season games, to tie the game at 1-1, in the top of the fourth inning. Morris (30-3) regained the lead 2-1 on an unearned run in the bottom of the fifth.

Kurt Sonnenberg’s 10-pitch at bat to lead off the Channahon seventh resulted in a walk. He fouled off five pitches with two strikes before coaxing the free pass.

“I was not going to strike out,” Sonnenberg said. “I battled and just continued to foul off pitch after pitch from Kubina. I even hit my car with one of the foul balls.”

Tyler Wong’s sacrifice bunt moved Sonnenberg to second and then he stole third base. An intentional walk to Pickett and another walk to Johnson Geers loaded the bases. Gomoll ripped a clutch-two-out, RBI single to score Sonnenberg with the tying run.

“It was a big spot in the game,” said Gomoll. “I  was really nervous but I really hit the ball well for the big single to tie the game.”

Pickett stuck out the side in the bottom of the seventh to send the game to extra innings. He allowed one earned run, two hits and fanned 13 to pick up the win. The last five batters that faced him struck out.

“I really didn’t think about the MVP,” Pickett said. “It’s awesome to win the award but it’s great for all of us, to win the championship. My fastball and curveball were definitely my best pitches tonight.”

Kubina allowed two runs and two hits while striking out nine and walking four in his seven innings of work.

Mayfield doubled with one out and scored the game-winning run on Manning’s ground out.

In the bottom of the eighth, Morris’s Cole Hintze ripped a one-out double. After Sonnenberg got a strike out for the second out, Hintze took third on a wild pitch. But Sonnenberg induced a short pop up to Mayfield in center to conclude things.

“ I just could not let Morris score,” Sonnenberg said. “It is awesome to be the champions!”

“I am so proud of my kids and my coaches for all that we accomplished,” Bisbee said. “With everyone back, I knew we would be good this year. We worked hard and battled back from 1-0 and 2-1 deficits tonight. The kids would just not lose.”

For American Leagion Post 294, the 28-2 record was the best regular-season mark in the 36-year history of the league that was founded by Joe and Donna Marshall. Morris took home the huge regular season championship trophy.

“We have truly had a special season, this summer,” Morris head coach Kevin Fischer said. “I am so proud of what my kids accomplished. Two great teams battled tonight and we just fell a little short.”

Third-Place Game – Crest Hill Sports Huddle 5, St. Joseph’s Stingers 3: Just when you think that you’ve witnessed everything in a baseball game, the great game once again shows you that ‘you ain’t seen nothing, yet’.

With Crest Hill Sports Huddle (25-7) up 5-3 in the top of the sixth against the St. Joseph’s Stingers (20-12) in the tournament’s third-place game, the truly unexpected happened.

The Stingers had runners on first and second with no outs. Crest Hill starting and winning pitcher Ryan Highland (Joliet West), threw one more pitch in the inning. Highland’s battery mate, Joshua Cunniff, took care of the rest.

The Stinger on third base streaked toward home plate, only to have Cunniff waiting for him at the plate for the tag and the third out of the inning. It completed an odd 2-2-2 unassisted triple-play by the Crest Hill catcher, who will play in high school at Plainfield Central.

American Legion Post 294 advanced to the finals with a 5-3 win over St. Joseph’s while Stonebriar Enterprises moved on following a 7-6 victory over Sports Huddle.

by Megan Schuller
Original Article located at the Herald News